Melissa Capps is on a mission to make data fun and efficient for creative entrepreneurs who keep track of their business online. She is the founder of AstraHive, a dashboard for creatives that allows business owners to see data and key metrics in one place.

Melissa is a part of our 2019 Velocity Creative Accelerator cohort. She was encouraged to apply by colleagues at SightSource, a software development firm in Winston-Salem, NC. CCE’s mission of helping creatives immediately resonated with her.

She and her husband moved to Winston-Salem a year ago and wanted to make new connections. Being part of the Velocity cohort gives her the opportunity to be part of the creative community in the place she now calls home while giving her startup the time and attention she feels it deserves.

Entrepreneurship comes naturally to Melissa. “I’ve always been creative and I love to learn and teach. I ran side hustles throughout high school and always had several jobs since I was a teenager”, says Melissa.

Before AstraHive, Melissa started a women’s clothing line. In 2010, she read something that made her decide to become an entrepreneur. She began asking herself what her strengths were and after realizing she has been sewing since she was a child, the women’s clothing line came alive.

“Entrepreneurship has always been a part of me – it was always inevitable.”

Melissa feels like creatives don’t realize that their skill set and their creations are valuable to the economy and contribute to the community. She said, “creatives take the skills and resources they have to solve a small problem in their community — and that’s important”. 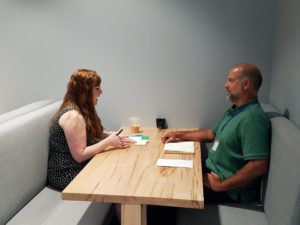 After seeing a hole in the market for creatives to understand and track key metrics and trends in their businesses, Melissa decided that becoming a software developer could enable her to create a tool to help creatives like herself.

To her, success is learning, teaching, and helping others, while bringing people on a journey with her. It’s the reason why she became a software developer. It’s why she wanted to build AstraHive before it even had a name.

Looking at data and metrics can be daunting and overwhelming for the creative who just wants to make things and sell it. With AstraHive serving as a central hub for key metrics for businesses, Melissa hopes to make data fun and efficient, not just dissemination of information.

“Brené Brown said, “stories are just data with a soul” and that’s what AstraHive is. It’s the story behind the data”, says Melissa.

Melissa shared that success for AstraHive would be employing people and helping them develop their skill set as software developers. In the long-term, AstraHive plans on implementing machine learning and big data to better present key insights to everyday business owners who may not have the resources to do so otherwise.

Outside of wanting to help people, Melissa’s family and friends are what keep her going, especially when things don’t seem to be going right. She shared that her husband often asks her, “what is the worst that can happen?” and that saying has become a mantra for her. Lately, Melissa’s been asking herself “what is the best that can happen? How can this failure turn out to be a success?” Melissa believes that not all failures are permanent, and that good things can come out of them.

See Melissa and the Velocity startups in action on Demo Night on September 26. Explore demo tables and hear each team’s pitch. This is your chance to discover the next big thing in creative entrepreneurship!